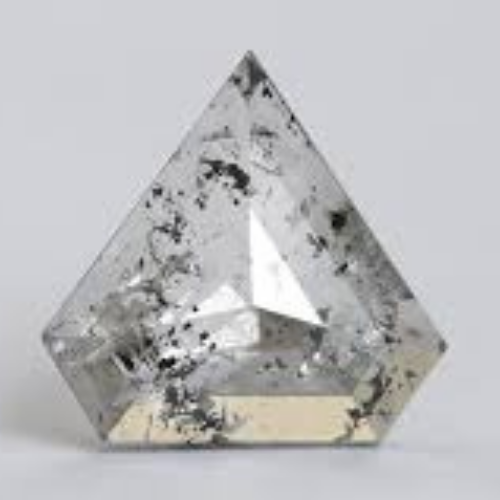 Colourless and coloured diamonds with impeccable clarity have been enjoying the spotlight in the industry and market of diamond jewelry for centuries now. Various forms of jewelry ranging from rings to bracelets have been making use of traditional diamonds. 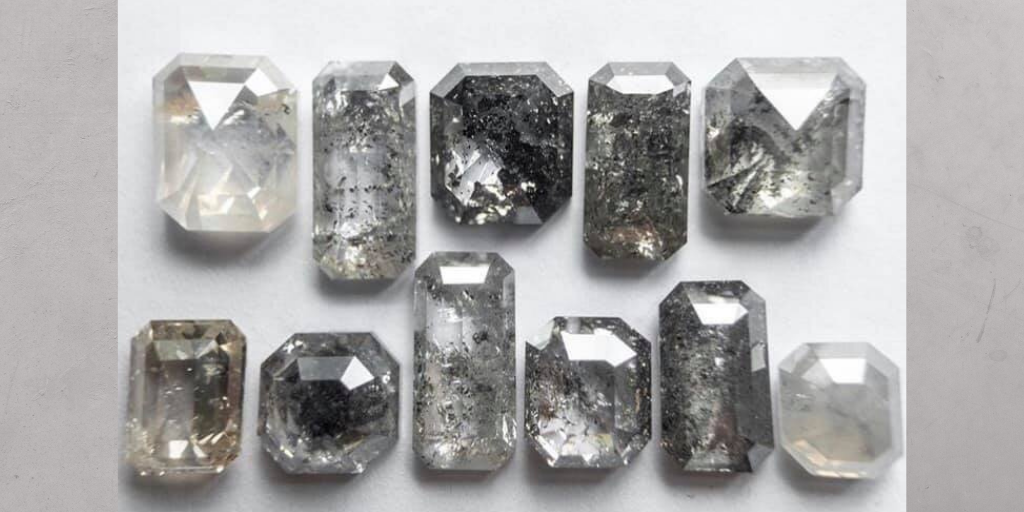 However, with each passing day, the trends in the market of diamonds are changing and shifting constantly. A new addition to these trends is the salt and pepper diamond which has earned a name for itself thanks to the one of a kind and stunning appearance it exhibits. Although salt and pepper as seasonings have been an essential part of cuisines since 450 BC, the diamonds of this name have recently been included into the family of gemstones since they were treated as an outcast due to their uniquely contaminated appearance.

The recent times have, however, witnessed a massive change in the perspective towards salt and pepper diamonds since they are now being included in almost all forms of jewelry, like pendants, rings, bracelets, earrings, etc. Engagement rings, too, have become embracing the salt and pepper diamonds in their designs since many brides have begun making demands for an engagement and wedding ring that is inclined away from the traditional standards and has its own unique aura and persona.

What is Salt and Pepper Diamond?

To answer this question, the most important thing that customers must be aware of how diamonds are formed naturally under the earth’s pressure.

During the process of diamond formation, extreme conditions like high pressure and temperature are exerted on the particles of the crystal over a long period of time that lead to the creation of the precious gems. Now, during this time, there are high possibilities that the particles of the crystal are exposed to external substances like carbon, minerals or even other gemstones. The substances tend to accumulate in the crystal and impart visible marks such as impurities and inclusions that often stay for as long as the gemstone does.

The colourless diamonds that we see also have these imperfections but the quantity is very less and hence seldom visible to the naked eye. Clarity grades to the colourless diamonds are in fact given based on the number of inclusions that are present in the stones. But the case is different when talking about the salt and pepper diamond since their clarity cannot be assessed in the same manner as is done for colourless or coloured diamonds. This is because the presence of inclusions and impurities is characteristic to the salt and pepper diamonds.

Salt and pepper diamonds are formed when a plentiful amount of inclusions accumulate in the crystal lattice of diamonds and black and white marks begin appearing which become very much visible to the naked eye hence, giving the diamonds its name and uniquely beautiful appearance.

It is important to note that under the umbrella of salt and pepper diamonds themselves, there are variations found within each stone wherein some feature more inclusions than others. The most attractive aspect of salt and pepper diamonds is the fact that no two diamonds of this category are identical since the amount and pattern of the inclusions present is personal to ever diamond, much like fingerprints. This diversity that is present within this family of diamonds is a unique and stunning feature that is offered to customers who are interested in purchasing jewelry that is fitted with such diamonds. Engagement rings, too, are now made with the salt and pepper diamonds with the various options in the gemstones, ranging from otherwise clear diamonds with few marks to diamonds that appear nearly black, being available to the public.

The salt and pepper diamond has been known for its inclusions and impurities because of which it was excluded from the diamond industry and market for the longest time since they were considered undesirable and inferior to the other gemstones.

However, this perspective has witnessed a major change today as the salt and pepper diamond is being embedded in various forms of jewelry ranging from a simple pendant to something as monumental as an engagement ring. The popularity of these diamonds has increased simply because of the tendency to impart the idea of perfection into certain things is readily declining and with each passing day more and more people find beauty even in the imperfections and inclusions. Many customers discover the high appeal that salt and pepper diamonds contain like yet dissimilar to the charm given off by colourless diamonds.

Reasons to Choose a Salt and Pepper Diamond:

The uncommon and unusual elegance showcased by these diamonds is beautiful in their own way for which the gorgeous speckled appearance is to be given credit for. Since no two diamonds of this kind look exactly alike, the uniqueness of every stone of salt and pepper diamond increases tenfold.

The versatility in salt and pepper diamonds lies in their ability to suit a wide variety of ring styles ranging from vintage to contemporary. People who want to opt for either a minimalist or maximalist look can tweak the arrangement of these diamonds in such a form that they would suit both the preferences like a rusty and old ring design or a modern, stylish setting.

The coloured and colourless diamonds are often expensive with even their least costly sample lying in the middle range of prices of salt and pepper diamond, however, the latter can generally be purchased at highly affordable prices since they do not conform to many people and designers’ idea of perfection.

These diamonds are rated a lot high on the scale of sustainability and eco-friendliness since they are much more easily available.

Diamonds are generally known for the harmful effects they create on our planet during the process of extraction since a large area and depth of our crust needs to be dug and damaged just to be able to get access to a handful of gem-quality diamonds. Salt and pepper diamonds too require some amount of mining which is also harmful on earth yet the negative impact is a lot lesser than the one created by the other diamonds.

Who should choose a salt and pepper diamond?

It is generally seen that salt and pepper diamonds are desirable for a particular part of any population.

Customers who are searching for something unique and out of the world diamond that does not conform to the common choices such as the colourless or fancy coloured diamonds opted by the public can decide on a salt and pepper ring. Since these rings also contain a large variety of design options, customers have the liberty of choosing the perfect one that they feel suits them the best.

These diamonds, as mentioned before, are available at relatively affordable prices and do not generally reach the sky-high values that colourless diamonds do. At good prices, the customers have an opportunity to stand out with the salt and pepper diamond rings while also not being bothered by what others say or feel towards their choices.

Since these diamonds are filled with inclusions and impurities, customers and brides who have an enthusiasm for imperfections and believe in nature’s natural course of creating the gems must give the salt and pepper diamond rings a well-thought look as these rings surely fit the description the best. They are also an ethical option along with having the capacity to provide customers with durability and so the salt and pepper rings are often desired by eco-friendly people who want to look the best but not at the cost of our environment.

How to Find the Perfect Salt and Pepper Diamond?

There is a large variety seen in almost all kinds of diamonds whether it is the colourless ones or the salt and pepper diamonds. Although their processes of formation are the same, the quality and result of both the kind are visibly different.

In the case of colourless diamonds, the higher grades indicate a perfect and expensive diamond which is not the same for salt and pepper diamonds since the inclusions present in them are perceived as a bad quality based on the 4Cs.

So even though we can use the 4Cs to understand the salt and pepper diamonds better, there is still no grading report that exists for these diamonds.

Although the factor of clarity differentiates between the good and bad colourless diamonds based on the number of inclusions present with the latter having a higher number and visibility, this is clearly not applicable for the salt and pepper diamonds since inclusions are the defining characteristics for these diamonds.

The intensity and amount of black inclusions present in these diamonds determine the colour that will be visible on the diamond. It can vary from colourless to milky to grey depending on the number of impurities present which will also heavily affect the overall look and charm of the diamond.

The method of cutting in the case of salt and pepper diamonds is performed in a manner which would enhance the appearance of the inclusions and patterns present in the stone which is drastically different from traditional diamonds which are generally cut to spotlight their brilliance. However, brilliance is never kept in mind by diamond cutters when cutting a salt and pepper diamond because this factor is anyways heavily reduced due to the presence of inclusions.

The famous cuts for salt and pepper diamonds include rose cuts and shapes like hexagons, kites, round, oval, pear, triangles and coffin

Rough or raw salt and pepper diamonds have also gained a name in the market and are generally used in bohemian and rustic settings which bring out the natural look of the stone with a minimal amount of meddling by humans.

Customers can opt for the larger sizes even if they are on a tight budget since the stones are readily available and affordable. The prices of these diamonds do not increase exponentially either with the increase in carat weight as opposed to what is observed in the traditional diamonds. Interested individuals can find a 4-carat salt and pepper stone for around $10,000, whereas the same 4-carat colourless diamond costs around $40,000.

Salt and pepper diamond rings are winning many hearts with their beautiful, unparalleled and extraordinary appearance with the bonus of the fact that they are available at affordable prices. Customers can now get access to a beautiful salt and pepper diamond ring for as long as they ensure that every aspect to the diamond has been taken care of and they have paid attention to every detail of the diamond that will affect its worth and appearance. What first comes to your mind when you think of a galaxy diamond? A diamond having the sha...
← Previous
Next →