REAL FACTS: How are Diamonds Made?

Home / COLORED DIAMONDS / REAL FACTS: How are Diamonds Made?
Return to Previous Page

REAL FACTS: How are Diamonds Made?

When we purchase a diamond we get a perfectly finished gem that is beautifully designed and structured. A polished Diamond does not resemble what was hidden in the ground. The last polished diamond structure is far different from what we get from the Earth.

After getting extracted from the mine, the diamond does not look as beautiful as it looks when polished. It seems like an ugly glass chunk. This chunk is embedded in the cross-section of Rock. After getting mine, it gets extracted from the rock and then gets cut and then polished and transformed into a beautiful stone. The Craftsman plays an important role in transforming the raw stone into a precious gem.

For thousands of years, Diamonds are loved by everyone. The first Diamond cutters were from Germany in the 14th century. Thereafter by the 16th century, several modern cutting techniques get developed that provide a higher Precision to the cutting procedure of the Diamond.  After the launch of these techniques, the industry got boomed.

Furthermore in human body Carbon comes to the second number after oxygen. Every living thing needs carbon to breathe and survive. The use of carbon is different in every creature. Graphite is an element that also looks like carbon. There are a lot of differences between a Diamond and a Graphite. As we all know that Diamonds are the hardest known substance available on this earth. The reason behind that is that carbon atoms are bound in such a manner that they are known as allotropes.

When the carbon atoms get combined and form a rigid form then the Diamond gets developed. Furthermore, the range of colors that is available in diamonds depends upon other elements like nitrogen, boron, and others. Due to having the lattice structure, there are several stones that look like classic diamonds. Although graphite is a good electrical conductor it still Diamonds Are Not. But yes, diamonds that are blue in color contain Boron is somewhere good electrical conductors. In several industrial appliances, these Diamonds are openly used.

Now the question is that “How much time a diamond takes to get formed properly?” the answer is here. In simple words, we can say carbon and pressure combine and forms a diamond. But if you think that by using carbon and pressure you can form a diamond then this is not true. The reason behind that is a rough Diamond takes naturally 1 to 3 billion years to get created. And we are not just saying, diamonds do take millions of years to get developed. All the time the rock is one that handles enormous pressure inside the earth’s surface. Thereafter the diamonds get a manageable and mineral death due to the deep volcanic activities. Sometimes it happens that this process causes this surface deposits but most of the time this happens at about one mile Deep.

There are two types of mines some are underground and others are opencast. The structure of mine depends upon the surrounding Rock type. Among all the dangerous occupations, Diamond Mining comes at the top chart.  Even there are several mining Industries those highest children because of their size and mobility features.

Where the Diamond formation happens

In theory, it is stated that diamond deposits can happen anywhere but in reality, this is not true. In order to extract the Diamond deposits upward towards the Earth’s surface, it is important to have a massive volcanic force. There are only certain areas where this process occurs. From the last 4 million years, search occurrence has not been found. Hence you can’t predict where the next massive volcanic force will occur. The areas with quiet seismic activities are the places where most of the Diamond deposits occur.

This means that without any risk of tremors or collapses mining can easily go ahead. There are some areas in North America where some small-medium deposits are found. On the other hand in the areas of Africa, Russia and Australia the largest deposits are found. Today most of the diamonds are having their origin in Africa.  Talking about the newly extracted diamonds and Russia is having an account for around 20%.

A Diamond In The Rough

As we have stated above that a diamond having water structure made assemble the Classic Diamond profile.  When a diamond is rough it gets several points from top to lower section. Also, the middle section is quite broader. 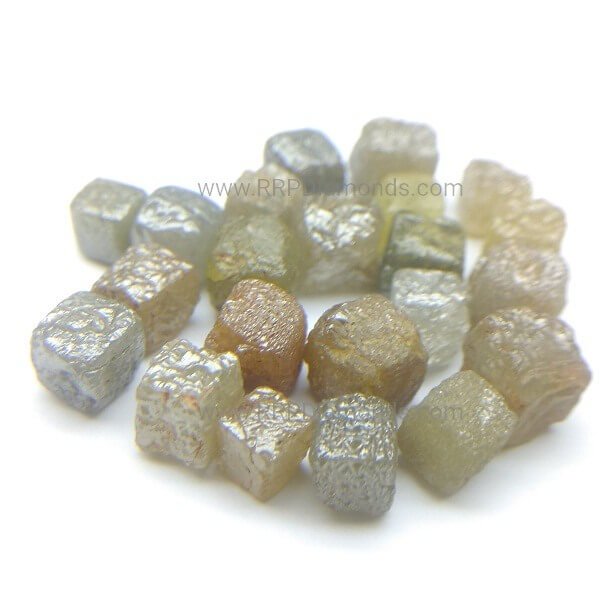 When you view or look at such type of diamond from the top then you will approximately see a square shape. That is the main reason cuts are always considered better. From most of the cuts, the yield produces is somewhere between 40-60%.  That is why it is also stated that the rounder the cut and the lower the yield will be. Furthermore consumers also usually demand round brilliant cut diamonds.

The polishing of the diamond gets done by using other diamonds. Rough diamonds are also used to cut other diamonds’ inappropriate shapes. The modern round cut in a diamond basically has 58 or 59 facets.  The number of facets depends upon the pavilion. If we did not have the craftsman then we will not be able to have the diamonds that are available for us today. Just because of them we get such beautiful things. Only the genuine artists are able to provide a rough stone to a Precision one. Along with machines and technologies, the creativeness and agitation of the craftsman please an important role in the Final Cut. 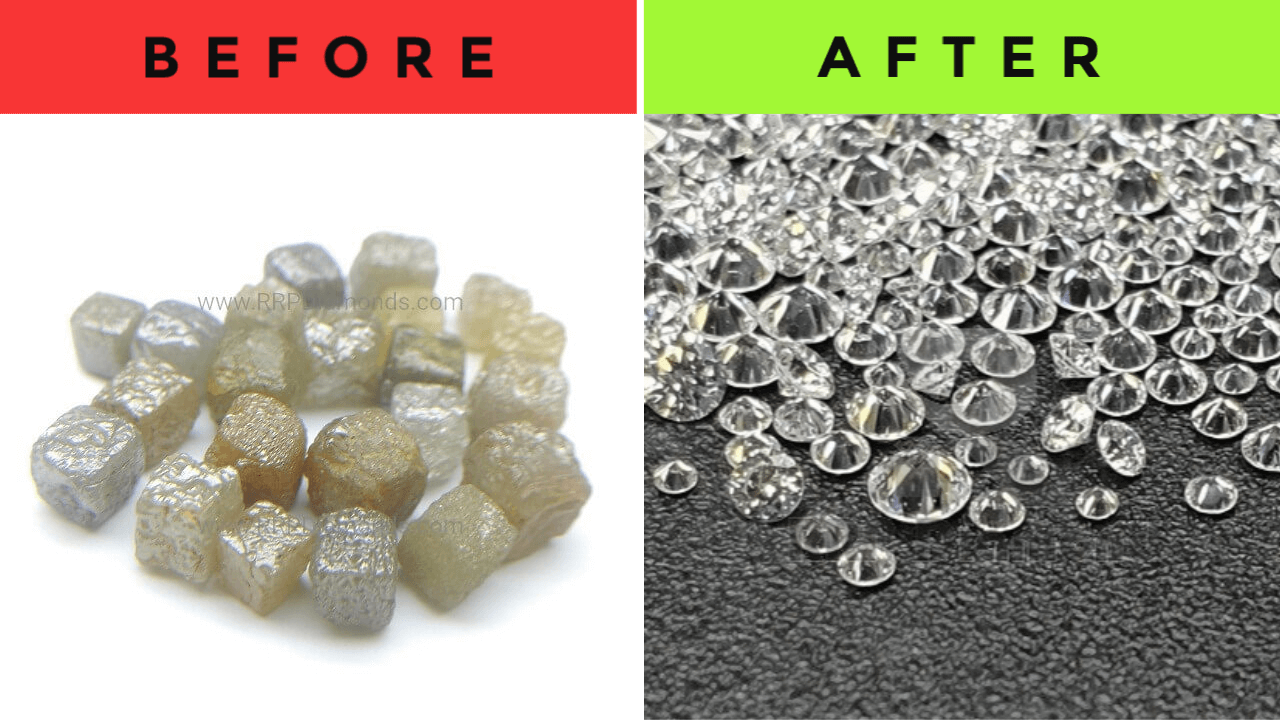 No one can easily predict or imagine how a rough stone gets transformed into a precious gem.  Transformation of stone into a diamond is no doubt a wondrous transformation. This transformation is very important because no one wants to have an ugly stone in their finger. Diamonds beautifies the personality of the person also.

Difference between Full Cut and Single Cut Diamonds – Which one to choose?
Next
Brief Details about Diamond Size Chart 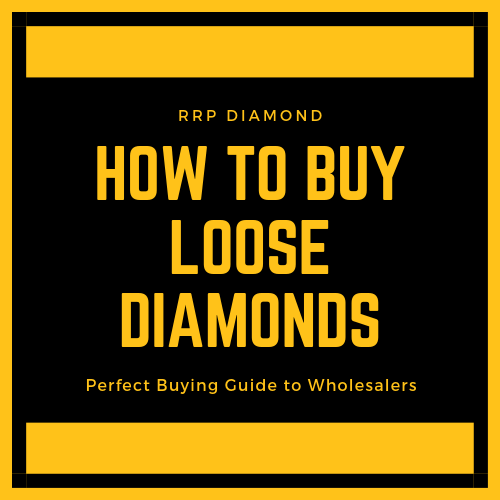 Loose Diamonds Wholesale Diamonds are expensive due to their limited availability, and the... 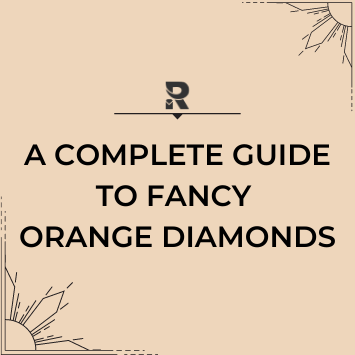 Natural precious diamonds which are orange in color and also called orange diamonds are cl... 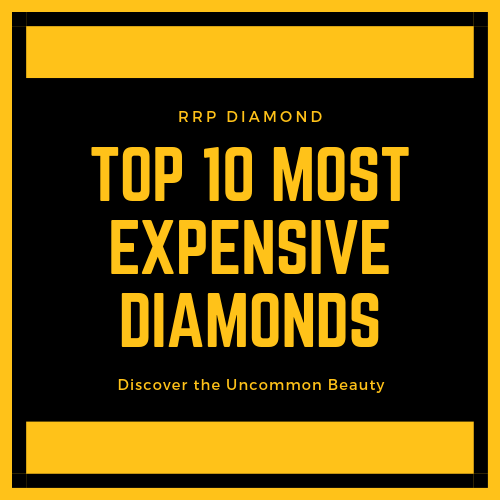 Everyone says nothing lasts forever, but when it comes to diamonds the phrase gets contrad...