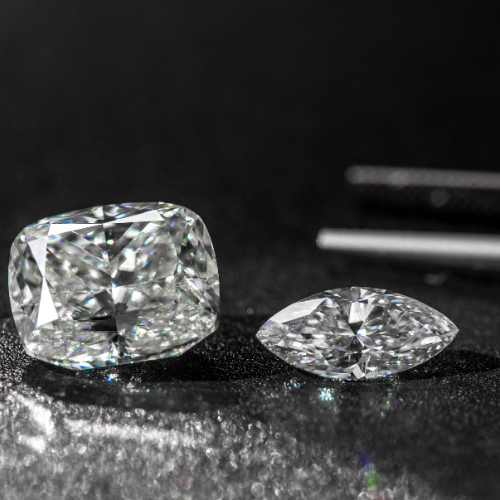 Diamond rings have since forever been the epitome of beauty and grace on a lady’s hand that often aids in enhancing the overall look of any woman’s hands it adorns. One of the most precious gemstones out there.

Diamonds have a lot to say about themselves and their wearers which could include the thoughts, emotions, and the overall personality exuded by the individual which is often expressed through the various aspects of a diamond, like its colour, shade, shape, design, etc. 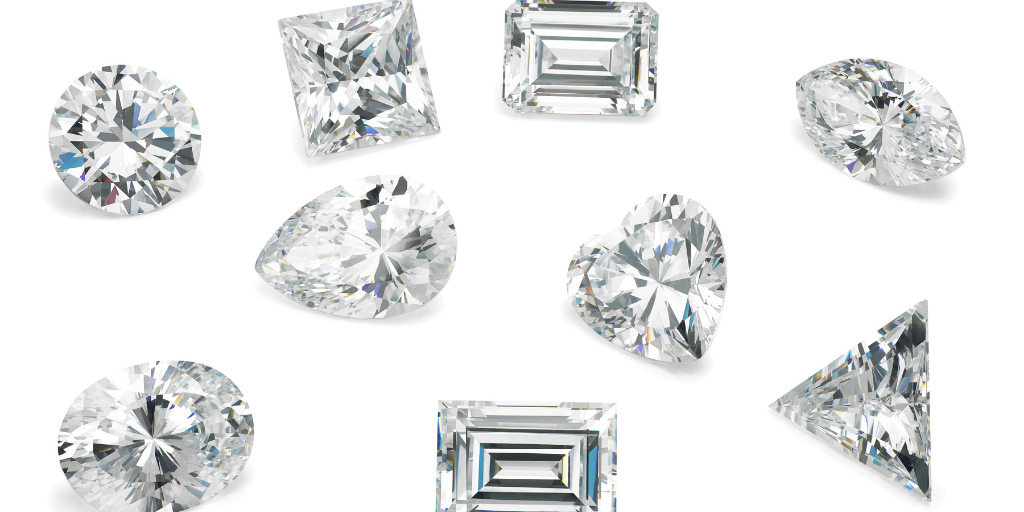 It is also often said by people that a particular diamond shape, when chosen by an individual, speaks volumes about the person’s personality and style.

Especially during the purchase of a diamond engagement ring, it is most important for the partner to be aware of what their better half prefers and thinks would best suit their personality and appearance. The most determining aspect of a diamond that creates the greatest impact on its owner is the diamond’s shape or cut like round, princess, oval, cushion, etc.

Although the round diamond rings are most wanted as engagement rings, there is a wide variety of shapes and cuts in diamonds that many others choose from, with each design in the variety symbolizing something unique and beautiful to its wearer.

One of the most popular and classic designs, the round diamonds account for around 75% of all diamond sales and is the most requested shape for a centre diamond in a ring.

The round diamonds are designed in a way that ensures that it appears as simple and sober as possible while expressing a maximum amount of sparkle and brilliance. Women that are charmed by this design are often elegant, simple, and traditional in nature and hence, are attracted by diamonds that exude the same qualities.

Additional characteristics like being conservative, honest, and a team player could also be expressed by people who are attracted to the round-shaped diamond. Such individuals also tend to be stubborn and lack spontaneity because they are often reluctant to accept any change and like things the way they are.

When purchasing an engagement ring, choosing a round diamond to be the centre of attraction in the ring is one of the safest and best options since it is a look classic enough to be appreciated by most women and has a variety of options present in it like the solitaire engagement rings or a pave halo setting.

Many celebrities have also been seen showing off round cut diamond rings with some of them being Miranda Kerr, Madonna, Barabara Streisand and many more.

The princess cut is the second most known cut in diamonds with its fame being credited to the cut’s modern and sleek look that is responsible for exuding a maximum amount of brilliance and sparkle in rings fitted with the princess cut diamonds.

Individuals attracted to this cut are often adventurous, attention-friendly, romantic, creative, fun, and life-loving since the cut itself is a brilliant symbol of modernity and uniqueness. It is also an option that can be classified under the category of risk-taking and hence, individuals who adored this cut in their rings often stand out from the crowd.

The cut was brought to life through the invention of Arpad Nagy in the 1960s and was originally coined as the ‘profile cut’. Resembling the round diamond in brilliance and sparkle, the princess cut is different from it because of the presence of a sleek and square shape in the latter.

Celebrities like Jessica Biel and Kate Bosworth have also been seen adorning the princess-cut diamonds.

A perfect mix of the old and new, the cushion cut diamond is a charming cross between two shapes of diamonds, the round and the princess cut. Customers who are attracted to this cut are often observed to be interested in history and tradition but also want to walk along with the current trends and be in line with the future.

They are also adventurous in nature and are always open to interesting changes and new things in life. Being an avid believer of romance and realism at the same time, individuals with a soft corner for the cushion cut diamonds are also people who believe in the present and the future and do not dwell in the past.

Celebrities who have been proposed with the cushion cut diamond engagement rings include Meghan Markle, Kim Kardashian, and Sofia Vergara.

A sophisticated and elegant option, the oval cut diamond is the perfect choice for people who have an eye for vintage and artistic things, and have a creative corner in their personalities.

The oval cut diamond too resembles the round brilliant diamond but the difference in both these shapes lie in the fact that the former is much more unique and creative with a vintage charm in its name. The sparkle exuded by the diamond is brilliant and shimmering while rings made of these diamonds are also highly practical.

With a very close resemblance to the oval cut diamonds, the marquise cut is home to an additional feature of pointed edges and hence, provides its viewers with a unique and beautiful style. The diamond tends to draw in a lot of attention, especially when it is set in an engagement ring because of the elongate appearance it shows off which leads to the diamond appearing bigger than its actual size. The diamond also has an effect on the wearer’s fingers wherein the gemstone makes it look long and slender.

Individuals attracted towards the marquise diamonds have a knack for flair and drama. They love the spotlight and are not afraid of an audience. Being a risk-taker and unique is also part of their nature as it is with the diamond and thus, the marquise cut diamond is perfect for such individuals.

The heart shape has since forever been declared as the ultimate symbol of love and passion. What better than a heart-shaped diamond to give to a loved one to express this symbol of eternal love and commitment? These qualities are also emphasized by the symmetry and equal proportions exuded by the diamond.

Individuals who are a hopeless romantic and wear their sentiments on their sleeves are the ones who are generally attracted to diamonds like these since these people are most often not afraid or shy away from expressing their love for their partners.

They also express qualities like loyalty, care, and concern for others and treat people and relationships with care. While all these characteristics create a positive impact, it is also possible for such individuals to get hurt and experience disappointment when they do not get in return as much as they invest.

The Asscher cut in diamonds is counted under the category of stylish and unique shapes because of the highly interesting geometric pattern the diamond’s facets are carved in. These patterns result in the diamond appearing very attractive and eye-catching as it forms the perfect combination of modern and vintage.

Women attracted to this design are often lovers of everything vintage and antique but reimagine it in a more modern and contemporary form. Such women also have a hint of drama and flair in their personality while also being absolutely confident about their femininity and appearance.

Emerald cut diamonds are another design that exhibits a sleek and long look as it is part of the few step cuts for diamonds. Women wearing rings fitted with the emerald cut diamond have the advantage of making their rings appear long and slender since this is the effect these diamonds cause.

It is also commonly observed that women who are attracted to the emerald cut diamonds exude qualities of honesty and simplicity along with having clarity regarding their identity and practising a warm-hearted and broad-minded attitude towards others. Such women are also sophisticated and elegant while having a soft corner for the classy items.

Celebrities such as Amal Clooney, Beyonce, Eva Longoria, and many more have been seen wearing emerald cut diamond rings.

As the name suggests, the radiant cut diamonds are famous for the radiance and brilliance they exude. Being a cross between the princess and emerald cuts, these diamonds are a rare and stunning choice for rings because of their flat bevelled corners that can be credited for the uniqueness and rarity presented by the diamonds. Anyone wearing rings that are studded with these diamonds, hence, tend to stand out from the crow.

Women who are attracted to such a diamond ring can be presumed to be trendy and modern with a hint of glamour in their personalities. Such women are also confident people and do not shy away from risks or a spotlight.

Resembling marquise in structure and appearance, the pear shape shows a distinct feature from the marquise diamonds which is having a rounded end. The diamond is basically a cross between the marquise and oval cut diamonds. These diamonds exhibit a traditional yet vintage look and also offer high versatility and outstanding effect in engagement rings.

Those that are charmed by the pear cut diamonds often are romantic and traditional at heart and might also be unafraid of risks and being unique. They often rebel towards the outlandish norms of society and love to challenge the status quo while ensuring that their life is lived on their own terms.

Also Read: Most Popular Engagement Ring That Captures Our Sight On Instagram

Each of these diamond shapes speaks different things about the women that are attracted to them. Although these may be completely subjective, it is often observed to be true amongst diamond shoppers and enthusiasts. So if you were to find a shape in this list that you feel suits your personality the best then there is no shame in owning your traits and personalities and wearing it with pride! 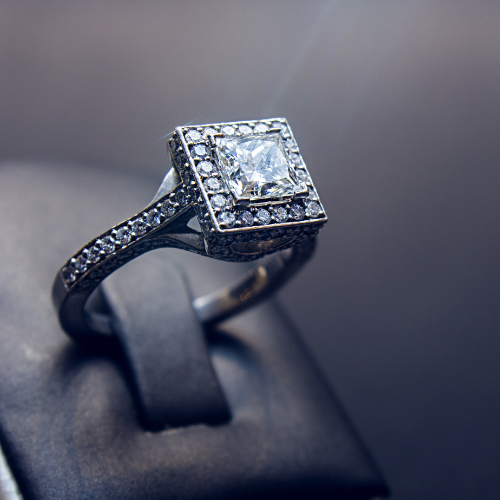 Things You Need To Know Before Sell...

Nowadays, people look at diamond rings as an asset rather than a piece of jewelry. Their h... 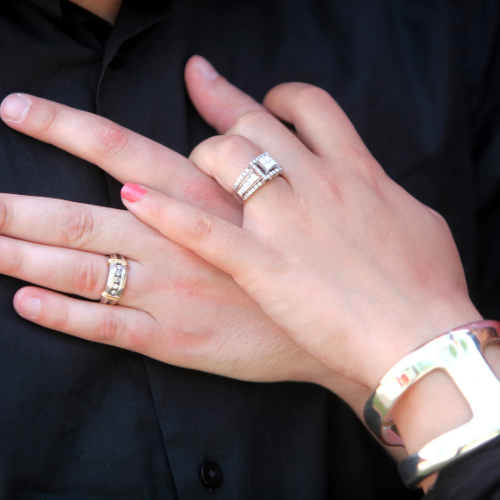 We all know the untainted scene: The man goes down on one knee. He proposes with a ring an... 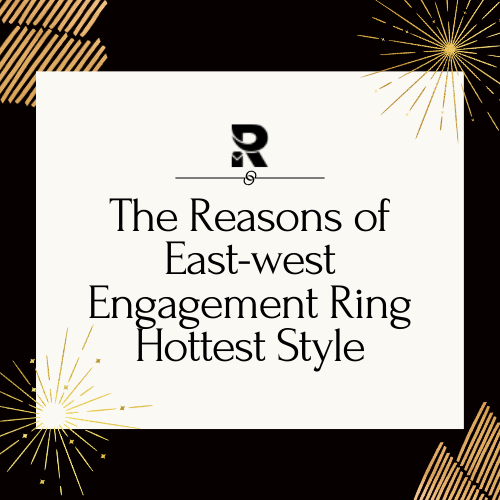 The Reasons of East-west Engagement...

We all are well aware by now that even a global pandemic cannot halt the wedding season, a...
← Previous
Next →